There are thousands of species of snakes in the world and some of these live in the water; sea snakes being a prime example of this. However, many snakes are terrestrial but it isn’t uncommon to see one entering the water from time to time.

But can snakes breathe underwater?

Snakes cannot breathe underwater in the way that a fish would; using gills. However, they are able to hold their breath for quite a significant length of time, and as such, are able to spend a lot of time underwater, without suffering any ill effects.

In this post, we are going to be discovering a little more about the snakes abilities in an aquatic environment and will be looking at how their respiratory systems work.

Snakes are not aquatic animals; well, at least, some of them aren’t. There are snakes that live in the ocean but even they need to come to the surface to take a gulp of much-needed air from time to time.

Land snakes aren’t typically very fond of being in the water but if they need to swim to reach a particular location then they will. Most of the time, a terrestrial snake will swim on the surface of the water rather than underneath it. However, if the moment calls for it, they can remain underwater for quite some time.

Snakes, both land and sea species, cannot breathe underwater. But they are equipped with the ability to hold their breath for an impressive amount of time.

Sea snakes can go for up to an hour or two under the water before needing to resurface. This is incredibly impressive but it is not the only adaptation that they have that enables them to live a life in the water.

The sea snake, which, by the way, is one of the most venomous snakes on the planet, has a longer long that its land-based counterpart. This is one of the main reasons that they are able to hold their breath for longer when swimming around in the ocean. 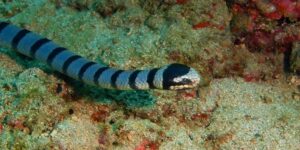 Furthermore, the sea snake is able to close his nostrils when he goes under the water so that no liquid can get inside. This is very similar to how the blowhole on a whale would function. The nostrils are positioned on top of the snakes head meaning that when he comes up for air, most of his body can remain under the water while the nostrils poke out and take in some air.

Recently, there has been a scientific discovery that shows that sea snakes have vessels on their heads which allow them to exchange some of the oxygen in the water. So, in a sense, these animals can breathe underwater, just not in the typical manner.

This form of breathing is known as cutaneous respiration, and essentially means ‘breathing through the skin.’ This works because the blood vessels in the head do not contain high levels of oxygen, so there is room for more to enter.

What About Breathing Underground?

If snakes are able to hold their breath for a decent length of time when under the water, this surely also applies to when they are underground.

Some types of pet snake will burrow under the substrate in their enclosures and they may spend a significant portion of the day there. This can be worrying for some owners who may become concerned that the snake will suffocate.

The good news is that your pet will be fine. This is a natural behaviour that he is simply replicated in captivity. Your snake was designed to burrow and for the most part, these are pretty smart animals. If your snake is under the substrate and begins to feel as though he is running out of air, he will know well enough that it is time to resurface.

What’s more, burrowing snakes don’t generally go very far down under the ground. In the main, they will burrow quite shallow and tend to leave a good amount of room around their heads for air to flow.

The Respiratory System Of A Snake

Snakes have very similar respiratory systems to humans in some ways. It includes a windpipe, bronchi and lungs. However, the key difference is that snakes only have one functioning lung.

In many snakes, there is a second lung known as the vestigial lung which is located on the left side of the body. However, this is usually very small and in some cases, may not be present at all.

The reason that snakes do not have two large, fully-functioning lungs like us is that there simply isn’t room in their long, tubular bodies.

Can Snakes Get Respiratory Infections

If you are the proud owner of a snake, one of your responsibilities will be to maintain his health. But many new pet owners are not aware of the conditions that could affect these animals.

These infections can be caused by a variety of things but most commonly are due to being in contact with a virus, perhaps if you keep more than one pet in the same enclosure. It is also possible for snakes to become sick in this way if they are faced with high stress levels.

However, you should also keep in mind that when your snake sheds its skin, wheezing can sometimes occur. This normally happens if the snake has trouble shedding its skin. You can help the process by bathing your snake to soften the skin.

Snakes cannot breathe underwater but they do have certain adaptations that allow them to remain under the water for longer than many other land animals.

Sea snakes have developed a network of blood vessels on their head that can soak up oxygen and have nostrils that close to stop water getting in. At most, they can hold their breath for up to two hours.

[su_box title="Affiliate Disclosure"]This website is supported by its readers. Please assume that all links are affiliate links. If you make a purchase from one of the links we will make a commission from Amazon. Thank you.[/su_box]

link to Do Millipedes Eat Mangoes? The Truth About What These Little Insects Eat

Do millipedes eat mango? This is a question that many people have asked, as these little creatures are often found in the same areas as this fruit. In this blog post, we will explore what millipedes...

Continue Reading
link to Can Millipedes Survive Being Cut In Half? You Will Be Surprised

Do you know what can survive being cut in half? Millipedes! Believe it or not, these little creatures have some pretty impressive survival skills. In this blog post, we will explore how millipedes...