If there is anything that people are worried about when it comes to reptiles, it is their bite. These animals are feared around the world for being aggressive and very capable when it comes to defending themselves.

But when you look at your beautiful, sweet pet leopard gecko, it can be difficult to believe that they could cause very much damage at all. After all, they look as though butter wouldn’t melt. So, do leopard geckos bite hard?

Leopard geckos can and do bite, although they don’t tend to do this very often. On the whole, they are relatively placid animals and won’t attack for the sake of it. That being said, there are some occasions where they may lash out, both accidentally and intentionally.

As a pet owner, it pays to always be mindful of the fact that, as docile as your leopard gecko may be, there is a potential for them to bite. In this article, we are going to be looking at the severity of the leopard gecko’s bite and when to expect a nip.

Is A Leopard Gecko Bite Painful?

Leopard geckos will not just bite you for the fun of it, there normally needs to be a reason. Of course, much like any creature, you may stumble across a leopard gecko that does bite for no reason, but this is not common. More on that later!

If you are unfortunate enough to have an impromptu meeting with your leopard gecko’s teeth then your first reaction might be to try and pull the lizard off. Let us warn you now; don’t do this!

A leopard gecko will bite down quite hard on you when they go into attack mode but typically this won’t break the skin. These animals do not have very sharp teeth but if you try to pull at them when they are biting, this could make them grip more tightly and there is then a risk that the skin will break.

If your leopard gecko has given you a chomp, give them a chance to release their grip and you will probably come away with nothing more than a bruised ego.

However, if the skin does get broken, there is a chance of a bacterial infection developing so it is important that you clean the wound thoroughly and keep it clean while it heals.

How To Prevent Leopard Gecko Bites

All animals have a natural instinct to protect themselves, and while we might have gentler ways of warning off a potential threat, your leopard gecko relies on his teeth.

You will notice that these animals tend to be a little more unpredictable when they are younger and this means that a bite is much more likely.

However, the way in which you handle your pet can be the difference between getting bit and staying unscathed. 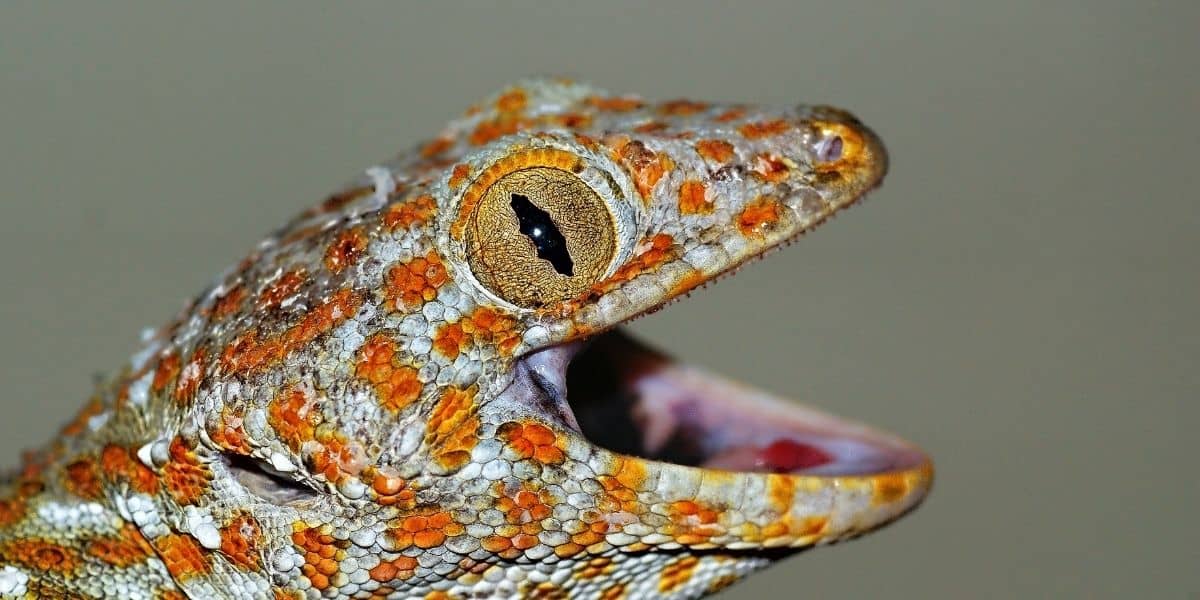 When you first adopt your leopard gecko, it is important to keep in mind that he or she may be frightened. After all, they have just been moved to a new and unfamiliar environment.

While they may need a bit of time to get used to their new surroundings, these animals tend to adapt pretty quickly and are excellent reptiles for children as they handle pretty well.

That being said, it is always best to supervise young people when picking the leopard gecko up. One of the most important things to keep in mind is that if you move suddenly, this will likely scare the leopard gecko, who may respond in one of two ways; they will either run away from you or lash out.

If you are confident and move slowly when approaching your leopard gecko, he will not feel threatened and it is highly unlikely that he would try to attack you.

What Causes Leopard Geckos To Bite?

In the main, there are three reasons that your leopard gecko may bite. Let’s take a look at these in a little more detail.

It’s only natural that when it is time for food, the leopard gecko may get a little over-excited. It’s often the same for us when we are really hungry. We will chow down without a second thought about what else is going on. If your leopard gecko is super excited about his meal, he may accidentally catch your finger.

What’s more, if you approach your pet without food when it is hungry, there is a chance that they may mistake you for food and try to give you a nibble. In the wild, leopard geckos are natural hunters and when they see something moving, they automatically think it is prey, your finger is no different. 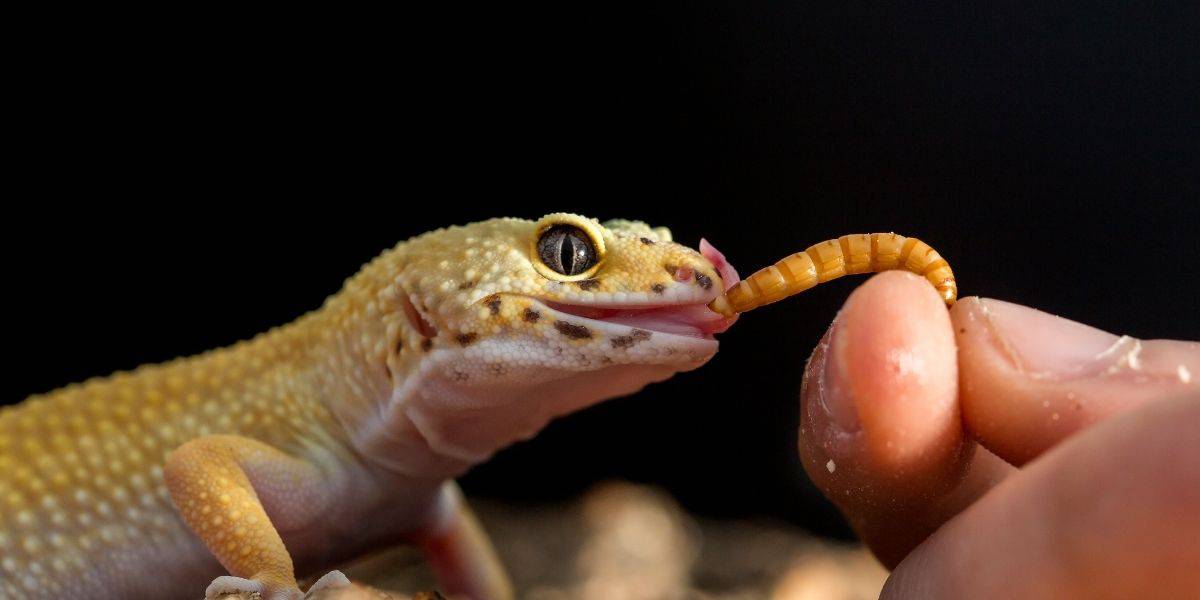 The best way to avoid being mistaken for food is to make sure that your pet always has a full belly before you attempt to handle them. It can be difficult to tell if a leopard gecko is hungry, after all, they can’t simply tell you.

However, their body language can be a huge giveaway. If they are making short movements and have their tail slightly raised, these are signs that they may be ready for a meal.

Leopard geckos, particularly the males can become extremely territorial. If you are only keeping one leopard gecko, this is unlikely to be a problem but when you have several pets, it could be the reason that your lizard is biting.

If you have just finished handling one of your leopard geckos, especially if it is a male, his scent will remain on your hands. You may not pay much attention to this but the next male that you try to pick up certainly will.

He won’t like the scent of his rival and this could cause him to become aggressive.

Between handling different geckos, it is always a good idea to give your hands a quick wash.

Just like humans, leopard geckos have their own personalities. Most of the time, these are quirky and incredibly enjoyable to observe. However, from time to time, you may experience a naturally aggressive leopard gecko.

This is not a common personality trait but if a gecko is aggressive, there isn’t much you can do about it other than leaving them alone and avoiding handling them.

Normally, if you have an aggressive leopard gecko, they will typically give you a warning before biting. This might be in the form of snapping their jaw or raising their tail. This should give you enough time to back away and leave the animal to its own business.

Of course, there may be times when you need to handle the animal, for example, to move it to a new enclosure or for a trip to the vet. In this case, it is best to distract the leopard gecko with one hand and use your other hand to quickly pick them up.

Leopard geckos are great pets for those who want a reptile that they can handle. However, from time to time, they may bite although there is usually a good reason for this.

When they first move into your home, the gecko, especially if it is young may need some time to adjust to its surroundings and could be a little on edge.

Furthermore, a leopard gecko can mistake your hand for food causing it to bite. However, sometimes, these animals are naturally aggressive and while this isn’t common, they will need to be left alone.

Affiliate Disclosure
This website is supported by its readers. Please assume that all links are affiliate links. If you make a purchase from one of the links we will make a commission from Amazon. Thank you.

link to Do Millipedes Eat Mangoes? The Truth About What These Little Insects Eat

Do millipedes eat mango? This is a question that many people have asked, as these little creatures are often found in the same areas as this fruit. In this blog post, we will explore what millipedes...

Continue Reading
link to Can Millipedes Survive Being Cut In Half? You Will Be Surprised

Do you know what can survive being cut in half? Millipedes! Believe it or not, these little creatures have some pretty impressive survival skills. In this blog post, we will explore how millipedes...